Navel, also known as "Little Guy", is the assistant to Dr. Naomi Kimishima.

Navel first appears as Dr. Kimishima's personal aide, something of a liaison between her and Delphi.

Navel supervises Naomi's operations (and on one occasion, assists by holding a penlight in a darkened tunnel), and works as a chauffeur for her as well. Little is ever mentioned about who he is or what his reasons for working for Delphi are.

Navel's role in the storyline ends abruptly when Caduceus USA makes its raid on Delphi, and he makes it quite clear to her that they "won't meet again".

In the beginning of Naomi's storyline, Navel is reintroduced as an FBI agent, dispatched to cooperate with her during investigations. She is suspicious, and acts as if her new helper is indeed an old acquaintance. Naomi warns him immediately to never talk about what happened in the past, most likely in reference to both of them working for Delphi.

Despite an awkward start, Navel and Naomi work together quite well. He is called solely "Little Guy" by Naomi, a nickname he doesn't appear to resent.

During their partnership, Little Guy constantly hints towards an active romantic interest in Naomi, but nothing ever appears to come from it, although on occasion Naomi flirts back.

It is suggested that Little Guy somehow faked his way into the FBI, and on at least one occasion, Naomi threatens to reveal his past to Holden.

Little Guy's main task as a special investigator is to relay crime details to the more medical side of forensics, and he is able to use his connections to have evidence analyzed or interrogate witnesses to help Naomi's investigations.

Little Guy seems to have somewhat of a medical background, however, as evidenced when he attends the autopsies of victims.

Little Guy's involvement in Alma Parker's autopsy may have been instrumental to later events in the plot--he mentions to Naomi the black bruises surrounding tissue in the corpse, which piqued Naomi's concern enough to contact Gabe in regards to the incoming Rosalia Virus pandemic.

During the Rosalia pandemic incident, despite not being obligated to by the FBI or CIFM, Little Guy follows Naomi to Resurgam to assist her and Gabe in reassembling the remains of Albert Sartre, and also assists Naomi via radio when she travels to Mexico and performs an autopsy on Rosalia.

It is also shown that Little Guy has an interest in music. In the Raging Bomber case, when he examines the broken guitar, he gets worked up about it because it belonged to a music legend. He even goes on to say that the Raging Bomber will pay and it shows how passionate he is about certain music legends. 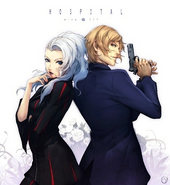 Navel in Delphi uniform
Add a photo to this gallery
Retrieved from "https://traumacentergame.fandom.com/wiki/Navel?oldid=11710"
Community content is available under CC-BY-SA unless otherwise noted.