Trauma Center: Under The Knife 2

Trauma Center: Under the Knife 2, released in Japan as Medical Emergency: Caduceus 2 (救急救命 カドゥケウス2), is a direct sequel to Trauma Center: Under the Knife. It takes place 3 years after the events of its predecessor and features the same main characters along with two new characters: Adel Tulba and Heather Ross. Released in North America and Japan in 2008, it was one of two games in the series to never be released in Europe.

The story is set in 2021, three years after the victory over GUILT. The Republic of Costigar, in Africa, is a country that has been plagued by warfare for over a decade, and is finally on the road to peace. However, they still struggle with attacks by guerrilla militants, land mines, and many refugees. Despite this, Costigar is slowly on its way to becoming a peaceful nation. Countries around the world have been sending aid to Africa, as well as building hospitals to help the citizens of Costigar. However, they are very short on staff and need more to be able to take care of all of the patients

Derek Stiles, along with Angie Thompson, get called to the war-ravaged country to study and figure out how to treat a new disease, dubbed "Costigar Disease". After saving a patient, Adel Tulba comes into the scene, and starts his work as a doctor. He, however, makes a misdiagnosis and Dr. Stiles has to operate. Some time later, a child soldier takes Angie hostage, demanding to be released from the camp. Adel calms him down and gets him to cooperate, but the child then collapses from the Costigar Disease. Derek operates on him and demonstrates his Healing Touch.

Following the operation, Caduceus USA informs Derek that he and Angie must return to America ASAP. Derek invites Adel to come along and further his studies, and he accepts. The three of them then fly to America, and Adel is in awe as he gets a glimpse of the first city he has ever been in. At Caduceus, the three then learn about Post-GUILT Syndrome, or PGS, which has been affecting past GUILT hosts.

At Elysium, a hospital for past GUILT hosts, Derek and Angie encounter Emilio Juarez, a past Pempti Sinner who was saved during the events of Under the Knife, and his nurse, Heather Ross. Derek operates on Emilio due to Post-Pempti, but despite that, the severe damage done to Emilio's liver requires a liver transplant. It is during this operation that the first strain of Neo-GUILT, Nous, is seen and treated.

Some time afterwards, Reina Mayuzumi, president of the Acropolis Pharmaceutical, meets Derek and attempts to have Derek work with Acropolis, going as far as to bribe him. Unknown to him, Reina wants to get his Healing Touch, which she does by having Derek filmed while performing an operation on a man with aneurysms.

Soon after, a GUILT outbreak occurs at Elysium. The Caduceus GUILT team mobilizes and heads for Elysium. With four patients infected with Kyriaki, including Emilio and Heather, Derek decides to treat Emilio last, hoping his GUILT antibodies could help him hold out against the infection. However, after successfully treating the other 3 patients, Emilio falls into critical condition. Derek tries to resuscitate him to no avail and Emilio passes away.

Derek, still traumatized by Emilio's death, is tasked with operating on Adel, who succumbed to the Costigar Disease. However, he soon realizes that he is unable to use his Healing Touch, forcing Robert Hoffman to take over. Derek sinks into a deep depression, and the staff decides to transfer him to Hope Hospital to help him recuperate under the supervision of his acquaintances, Greg Kasal, Cybil Kasal and Mary Fulton.

While at Hope, Angie pays Derek a visit and requests that he accompany her to see her father, Kenneth Blackwell, in prison. Kenneth comes down with Post-Savato, putting Derek in a position that forces him to recall his motivation to be a doctor. With his faith in himself renewed, Derek regains the Healing Touch and treats Kenneth's PGS.

Soon after, two new threats appear to the Caduceus staff. The first is the Hands of Asclepius, a new medical organization headed by Patrick Mercer. Its latest advances in medical technology, including the development of an ability enhancement programme, has attracted a lot of staff, including Adel and Kenneth, and leaves Caduceus's ranks understaffed. Adel, in particular, was upset over Derek's failure to treat him, and soon acquires a variation of the Healing Touch with the assistance of the HOA's ability enhancement programme.

In addition to this, the remnants of Delphi have begun to mobilize, causing more GUILT outbreaks across the country. Though Adam, the former leader of Delphi, is dead, the terrorist group is being led by Heinrich von Raitenau, Adam's grandson. Delphi remains in opposition to both Caduceus and the HOA, as they kidnap Reina and infect her with Pempti.

During a raid on a Delphi outpost, though, Derek and Angie are kidnapped by Delphi, and brought to the main Delphi HQ. Heinrich reveals his plans to use Angie as host of more GUILT, and for Derek to be a victim. Angie and Derek manage to escape imprisonment, and contact Caduceus, informing them of their location. Caduceus and the HOA proceed to storm the Delphi headquarters, where they find that Heinrich is using his son and daughter as GUILT hosts, and he plans to enter suspended animation. Adel attempts to use a GUILT serum developed by Acropolis to treat the GUILT, only to activate the dormant GUILT. Derek proceeds to save the lives of Heinrich and his children.

After the fall of Delphi, Caduceus receives a new patient - Annie Fisher. The team is requested to keep the operation confidential, due to the presence of chiral reactions not matching any known GUILT in her system. During the operation, they discover and treat another strain of Neo-GUILT, Bythos. It is eventually revealed, with Kenneth's help, that the Neo-GUILT is coming from the medications produced by Acropolis. During an investigation on the HOA, its doctors, who have received the medications as well, begin collapsing from brain trauma, and Adel becomes crazy and sick from Neo-GUILT Sige.

Patrick is traced to a plant where it is revealed that he was researching Neo-GUILT to revive his comatose wife, Tracy Mercer. He attempts to activate Bythos to revive her, but this fails and forces Derek to save Tracy's life. Patrick escapes to a deeper part of the plant, where he tries to use Reina's Aletheia as a last resort. The activation of Aletheia goes awry as it rapidly ages Reina, forcing Derek to operate on the last Neo-GUILT to save Reina's life and prevent it from being unleashed on them. After Aletheia is defeated, Patrick attempts to take down the UN soldiers with him, but gets shot and dies.

Over the following few months, Caduceus regains its standing in the medical community, Adel returns to Africa, and Derek and Angie begin traveling the world. The game ends with them on a flight to meet up with Professor Irvine, a cranial nerve surgeon, reading a thank you letter from Heather and discussing Derek's training (possibly awakening Tracy as a result). Angie then chooses that moment to implicitly confess her feelings for Derek, with the closing text strongly suggesting a relationship.

Under the Knife 2's gameplay remains relatively unchanged from the other Trauma Center games in the series, but with the addition of new tools from Second Opinion and New Blood, including the defibrillator. The game features the addition of difficulty settings, a nod to Second Opinion and New Blood. For a Neo-GUILT operation, in order to act as a gas compressor, the player blows into the microphone in order to clear gas from the field of view. The rank system remains unchanged from the past two games. 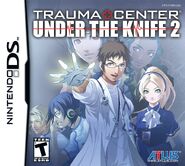 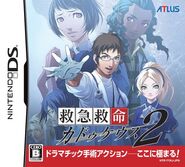 JP box art
Add a photo to this gallery

Retrieved from "https://traumacentergame.fandom.com/wiki/Trauma_Center:_Under_the_Knife_2?oldid=12383"
Community content is available under CC-BY-SA unless otherwise noted.